We want to send a big thank you to everyone who participated in our contest and helped make it a success! 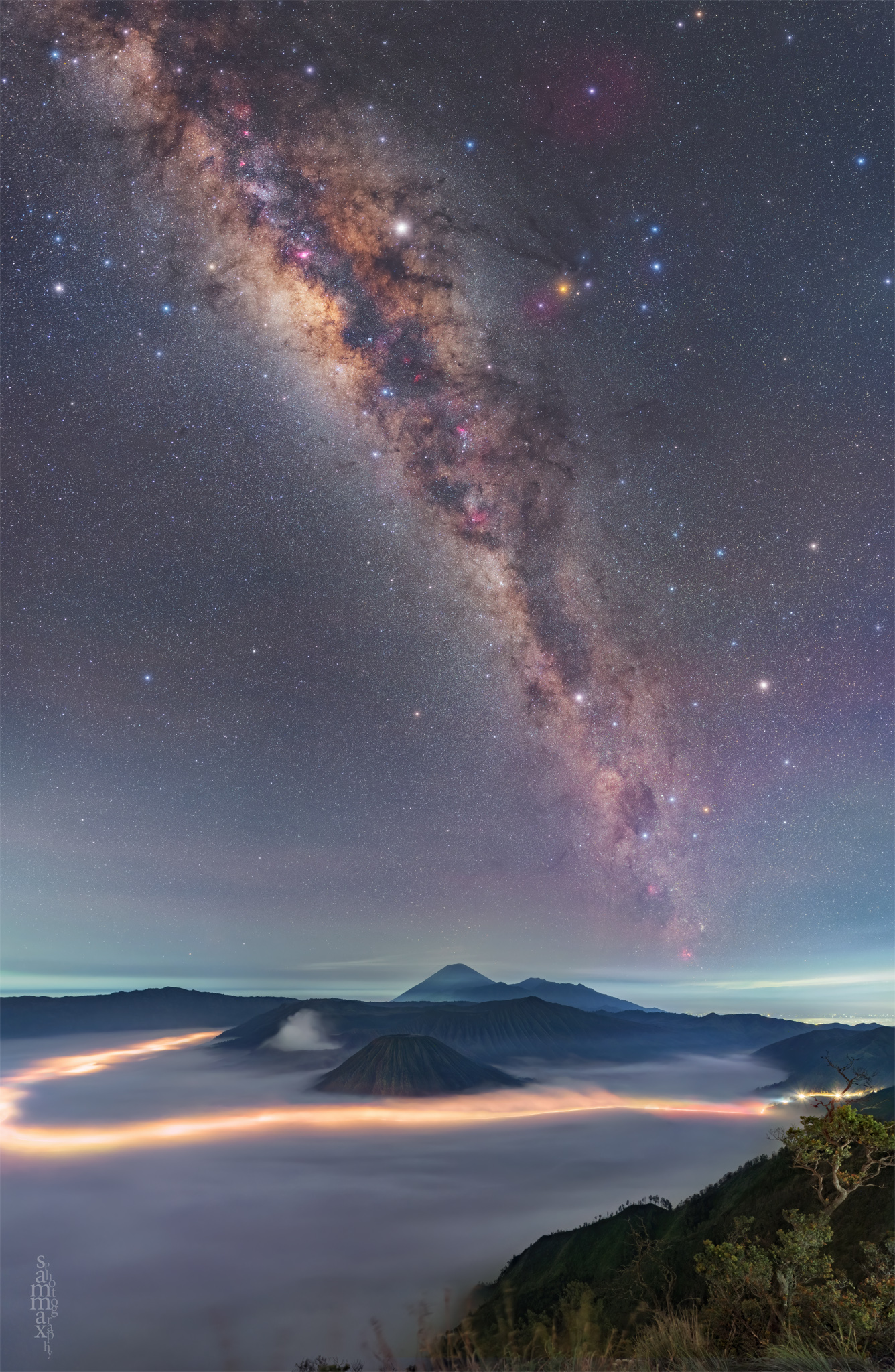 1) Photographer: Sabine Gloaguen
-Country : France
- Title of your Astro photo : X space
- Equipment used : Canon EOS 6D camera / sigma 24mm
- Imaging target and time : 2018
- Briefly describe your photo, location of the photography included :
A more artistic projection of the starry sky, composed of 50 images taken at 360°. The sky is presented in a circular form, mainly bounded all around the horizon by the Andean cordillera. The bright spots are created by the light of the surrounding towns and villages, even Chile does not completely escape the light pollution... A little above the horizon, we can see the airglow that illuminates the sky in orange and green tones.
Finally, a gigantic X bars this sky: one of the branches is formed by the Milky Way, the other branch is created by the Zodiacal Light.
- Digital processing methods employed : Panorama of 50 pictures assembled with APG / Photoshop 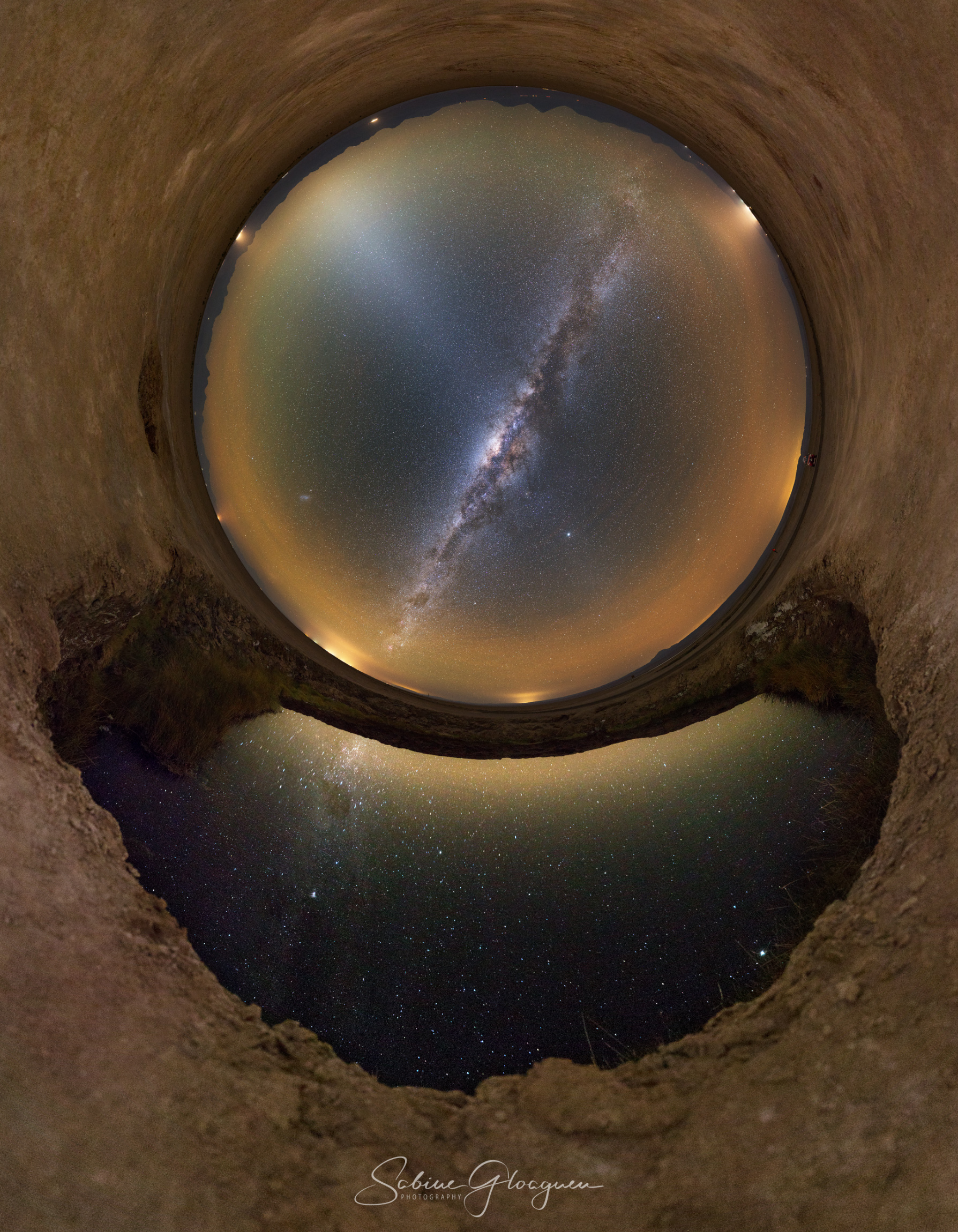 2) Photographer: Lukáš Veselý
Country: Czech Republic
Title: Ice kingdom
equipment: Canon 6D and Canon 16-35 f4 IS USM, Skywatcher star adventurer
target and time: Orion constellation with H alpha emissions nebullas, taken about 8 pm
Description: Spend a night somewhere behind the ice was really a challenge. the terrain was very slippery and dangerous. I found this ice window before sunset, set the camera on a tripod and let it there for about 2 hours unattended. In the night I started to shooting the scene. Then I captured the stars on eqatorial mount on the hill above the waterfall.
The mountains are illuminated by near ski resort.
The high clouds kicked the bright stars of Orion to another level.
Location: Obertauern, Austria
Postprocess: image stacking for noise reduction, then blended the sky and foreground in photoshop 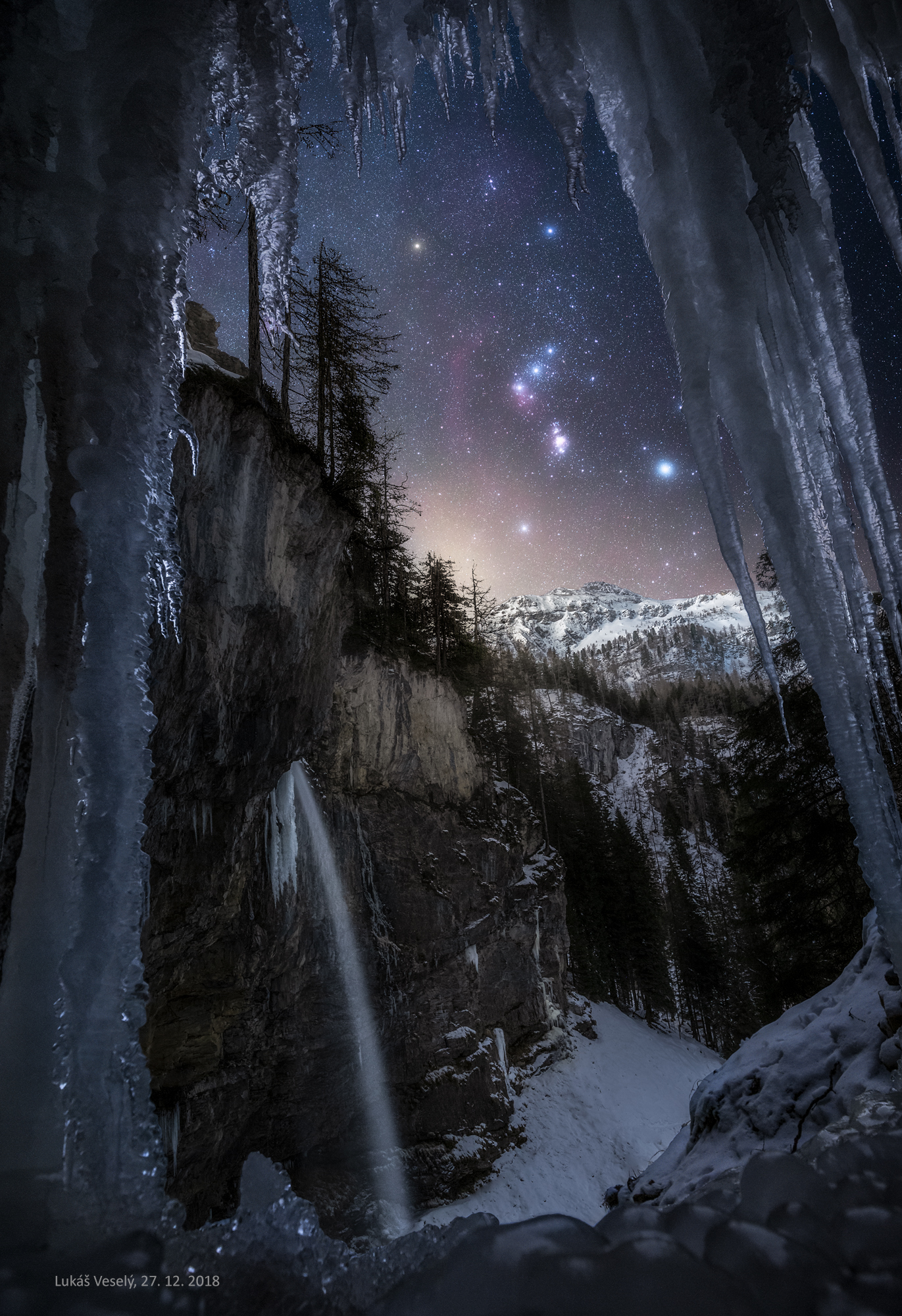 1) Photographer：@Lorenzo Ranieri Tenti
Country: ITALY
Northern Symphony
Equipment used:
Camera: Sony a7S; lens: Sony-Zeiss 16-35mm f4 & tripod.
EXIF: 10 portrait shots panorama. Single exposures at 16mm, Iso 8000, f5, 30sec.
Target of the image:
The target of the image was to capture all in once the winter milky way and starry night sky with the northern Lights, fortunately I was so lucky to capture the Zodiacal Light too. The image was taken the night between the 31st of February and the 1st of March.
Description:
This picture has been taken on the frozen surface of Lake Superior (Michigan - U.S.). This image shows most of the late-winter night sky. It is possible to observe: the Zodiacal Light crossing Mars and the Pleiades, Andromeda Galaxy, the MilkyWay, Polaris, the Big Dipper and the bright Aurora Borealis. This image is a panorama composed by nine pictures plus one further picture of the person with the headlamp. On-field difficulties were related to cope with the extreme cold of -23°C. Post processing difficulties were related to stitch all the images in a panorama, to blend the silhouette and noise reducing (noise caused by the high ISO).
Location: Houghton – MICHIGAN; 1st March 2019
Image processing:
The ten pictures were stitched together in a panorama with AutopanoGiga software. 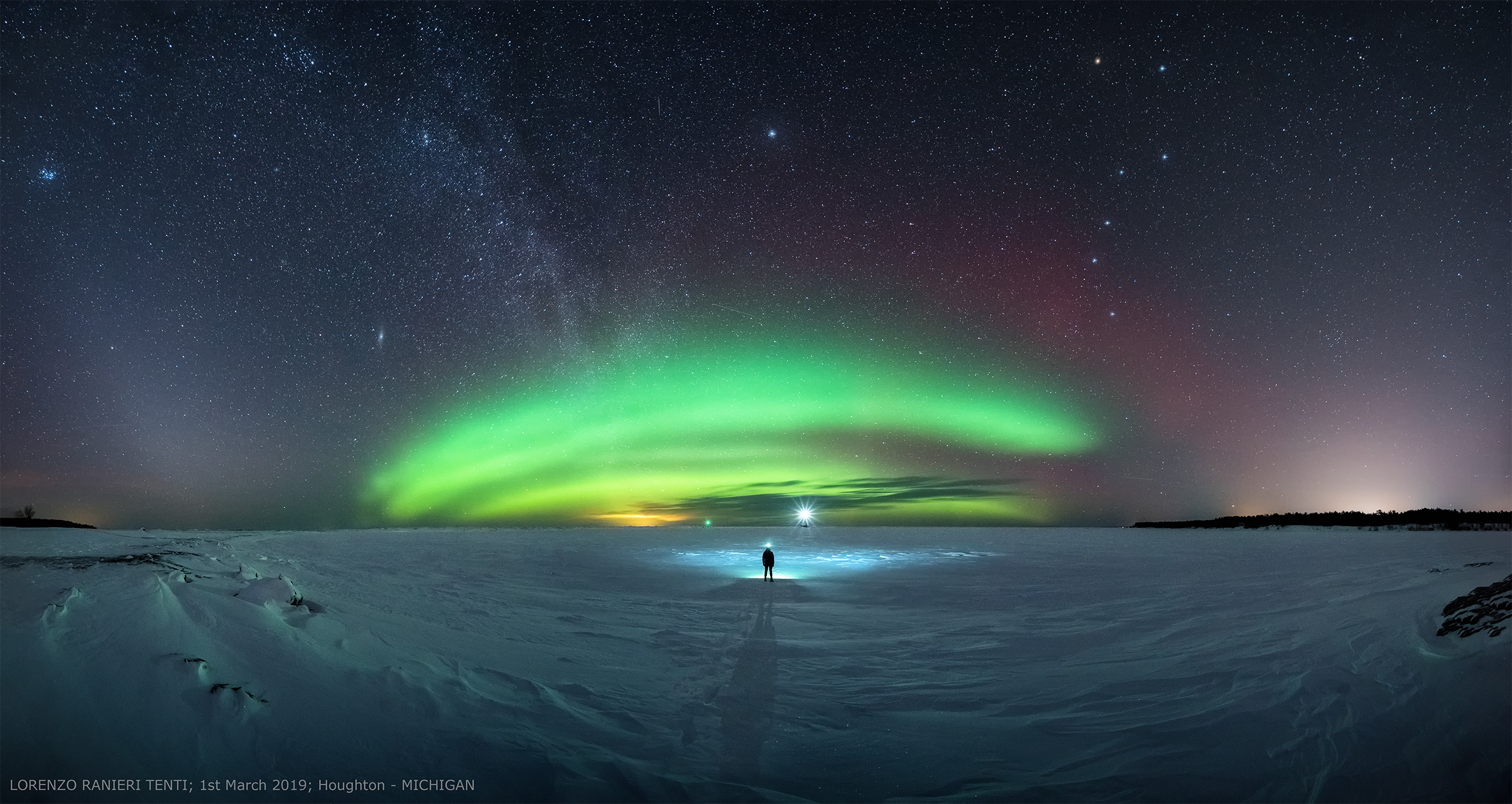 Taken atop of Ranzinger Vince Lookout Tower, near Tatabánya.
The tower is a 30-meter-high mine cage built in 1980 in the memory of stone mining of the area.
As the tower had become one of the most "popular" location of suicide attempts of the county, local authorities decided to erect fences and bars around the stairways and the towertop. Since then climbing up and being on the top has a prison-like feeling. 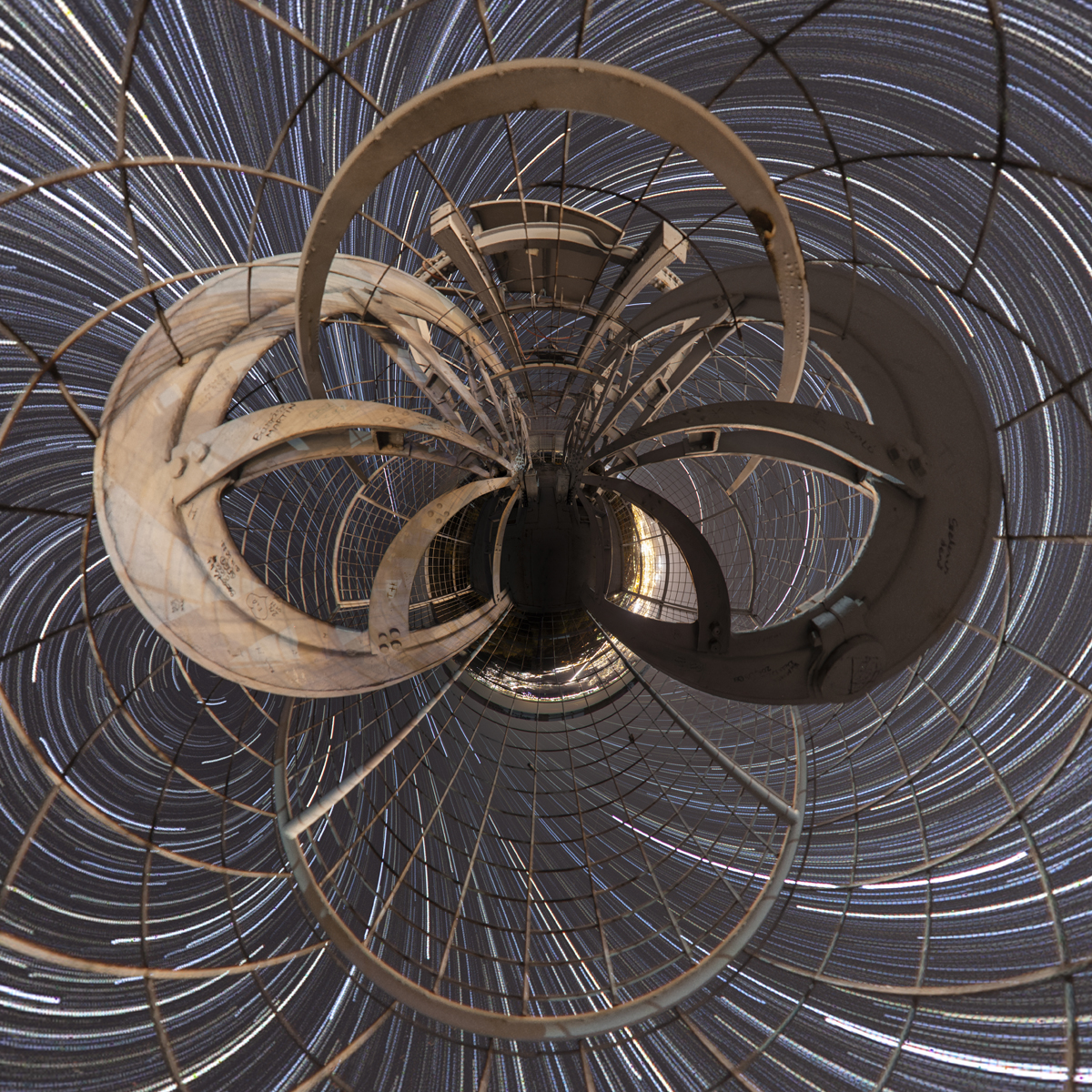 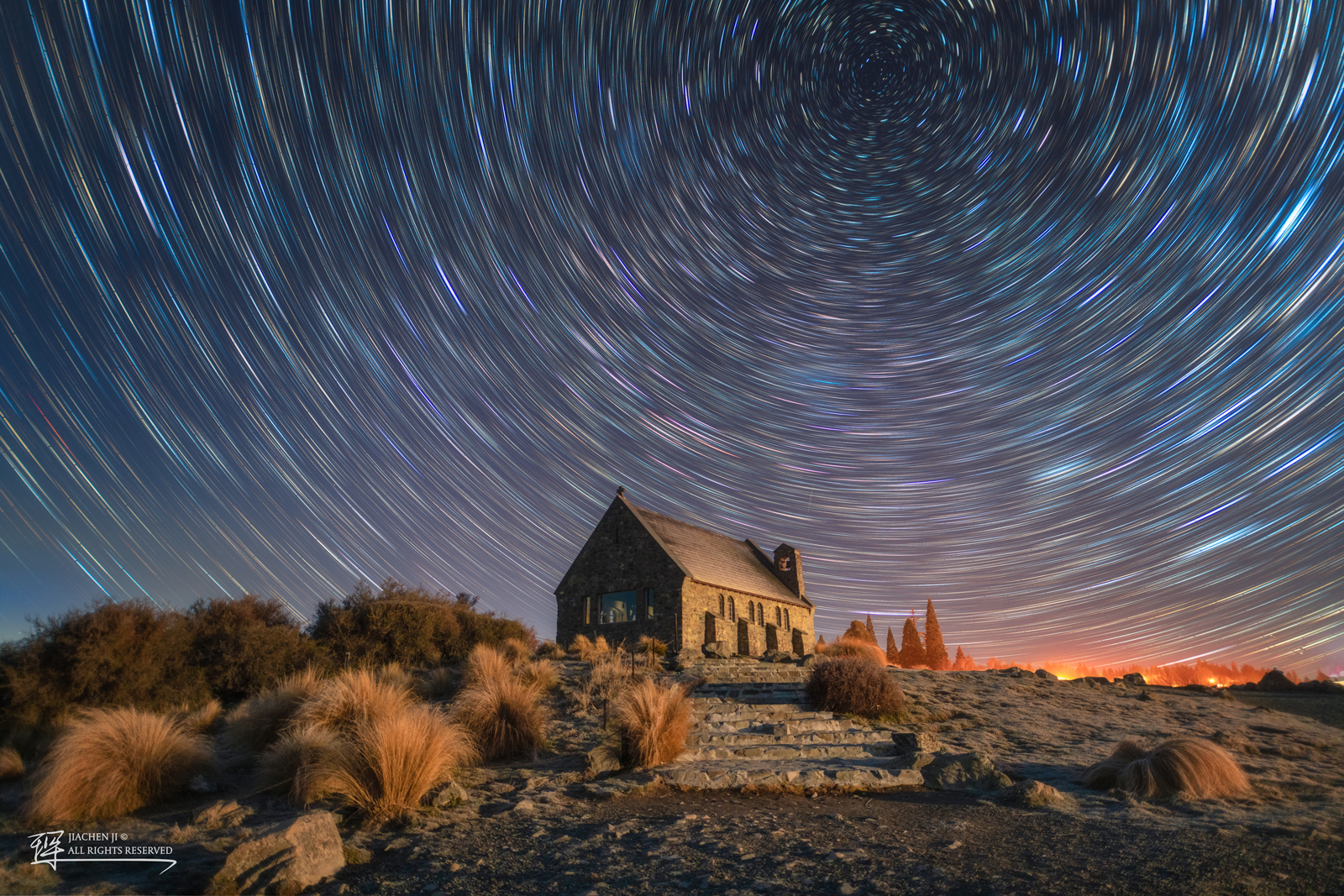 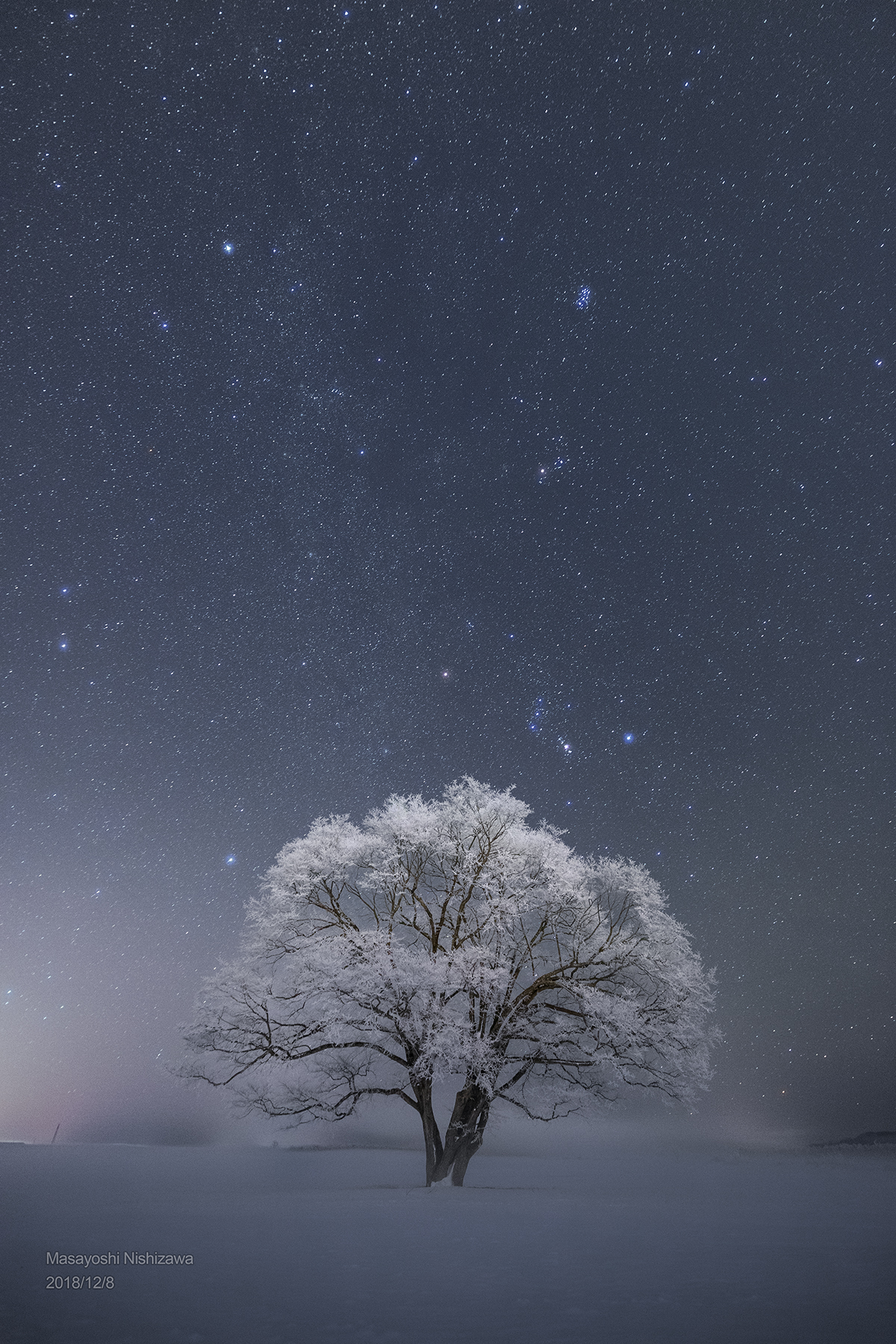